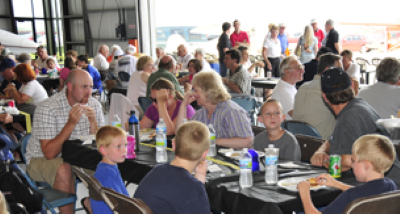 Whether you hold a pilot’s license, are dreaming of beginning your flight training, or, if you just love to take in the sights and sounds from the ground, Waukesha County Airport/Crites Field is home to several groups and associations filled with people who love aviation. The following groups available in our area include:

Wisconsin Fox River Flyers (WFRF) is a non-profit/non-stock KUES-based Wisconsin corporation that provides its members with social and educational aspects for aircraft usage, along with the lowest cost of flight possible. Your purchase of a membership, gives you the ability to fly one of the group’s three airplanes: a 1972 Piper Charger 235 and a 1977 Cessna 172N Superhawk 180hp.

Formed in 1931, the Waukesha Aviation Club (WAC) is one of the oldest organizations in the State of Wisconsin in continuous service to aviation. The Club founded the Warren S. O'Brien/Crites Field Museum, filled with information about the Waukesha County Airport/Crites Field and aviation in Wisconsin. The Club meets monthly for a Coffee Talk in the Airport Terminal, where members share stories of their flying adventures and current events in aviation. Members are also very active in volunteer efforts to support the Wings Over Waukesha air show and other important events. For more information, visit the Waukesha Aviation Club at wacwi.com on Facebook or contact Dennis at 414-305-0565.

The Civil Air Patrol (CAP) is a non-profit organization with more than 61,000 members nationwide, operating a fleet of 550 aircraft. The official auxiliary of the U.S. Air Force, the CAP performs 90% of continental U.S. inland search and rescue missions as tasked by the Air Force Rescue Coordination Center, and is credited with saving an average of 80 lives annually. Its volunteers also perform homeland security, disaster relief and drug interdiction missions at the request of federal, state and local agencies. CAP members serve three main purposes: emergency services, aerospace education, and the CAP Cadet Program.

The Wisconsin Wing of the CAP has 35 units and 1,000 members, including a Waukesha Wing that actively participates in search and rescue missions with local Emergency Services, as well as the CAP Cadet Program and aerospace education. Visit the Wisconsin Wing website and Facebook page for more information. New members and cadets are always welcome!

Based at the Waukesha County Airport/Crites Field, the Wisconsin Wing of the Commemorative Air Force is part of a national organization that celebrates the sacrifice of all military aviators from WWII, Korea, Vietnam and the Gulf Wars through the restoration of over 156 military aircraft flying in 70 Wings across the United States. This "flying museum" of the CAF strives to keep alive the memory of these aviators for future generations. The Wisconsin Wing flies a 1943 SNJ-5/AT-6 North American advanced trainer with Navy markings and a 1943 Fairchild PT-26 Cornell Primary WWII Trainer. Members enjoy monthly meetings, fly-ins and other events throughout Southeastern Wisconsin during flying season. The Wing hosts regular social events, including a spring banquet, an annual holiday party and regular hangar cookouts for members. For more information, visit the CAF Wisconsin Wing website and Facebook pages. For more information on the National CAF organization, click here.

Additionally, the Experimental Aircraft Association (EAA), based in nearby Oshkosh, WI, is a gateway to several aviation special interest communities, of which many of our tenants are active members. Visit the EAA website for more information, or select the specific links below: