Rabies virus causes an acute encephalitis in all warm-blooded hosts, including humans, and the outcome is almost always fatal. Although all species of mammals are susceptible to rabies virus infection, only a few species are important as reservoirs for the disease. In the United States, several distinct rabies virus variants have been identified in terrestrial mammals, including raccoons, skunks, foxes, and coyotes. In addition to these terrestrial reservoirs, several species of insectivorous bats are also reservoirs for rabies. 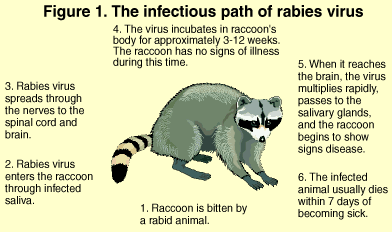 Following primary infection (see Figure 1), the virus enters an eclipse phase in which it cannot be easily detected within the host. This phase may last for several days or months. Investigations have shown both direct entry of virus into peripheral nerves at the site of infection and indirect entry after viral replication in non-nervous tissue (i.e., muscle cells). During the eclipse phase, the host immune defenses may confer cell-mediated immunity against viral infection because rabies virus is a good antigen . The uptake of virus into peripheral nerves is important for progressive infection to occur.

After uptake into peripheral nerves, rabies virus is transported to the central nervous system (CNS) via retrograde axoplasmic flow. Typically this occurs via sensory and motor nerves at the initial site of infection. The incubation period is the time from exposure to onset of clinical signs of disease. The incubation period may vary from a few days to several years, but is typically 1 to 3 months. Dissemination of virus within the CNS is rapid, and includes early involvement of limbic system neurons. Active cerebral infection is followed by passive centrifugal spread of virus to peripheral nerves. The amplification of infection within the CNS occurs through cycles of viral replication and cell-to-cell transfer of progeny virus. Centrifugal spread of virus may lead to the invasion of highly innervated sites of various tissues, including the salivary glands. During this period of cerebral infection, the classic behavioral changes associated with rabies develop.

Signs & Symptoms
The first symptoms of rabies may be nonspecific flu-like signs — malaise, fever, or headache, which may last for days. There may be discomfort or paresthesia at the site of exposure (bite), progressing within days to symptoms of cerebral dysfunction, anxiety, confusion, agitation, progressing to delirium, abnormal behavior, hallucinations, and insomnia. The acute period of disease typically ends after 2 to 10 days. Once clinical signs of rabies appear, the disease is nearly always fatal, and treatment is typically supportive. Disease prevention is entirely prophylactic and includes both passive antibody (immune globulin) and vaccine. Non-lethal exceptions are extremely rare. To date only six documented cases of human survival from clinical rabies have been reported and each included a history of either pre- or postexposure prophylaxis.

Pathology
Pathology of rabies infection is typically defined by encephalitis and myelitis. Perivascular infiltration with lymphocytes, polymorphonuclear leukocytes, and plasma cells can occur throughout the entire CNS. Rabies infection frequently causes cytoplasmic eosinophilic inclusion bodies (Negri bodies) in neuronal cells, especially pyramidal cells of the hippocampus and Purkinje cells of the cerebellum. These inclusions have been identified as areas of active viral replication by the identification of rabies viral antigen. Several factors may affect the outcome of rabies exposure. These include the virus variant, the dose of virus inoculum, the route and location of exposure,as well as individual host factors, such as age and host immune defenses.