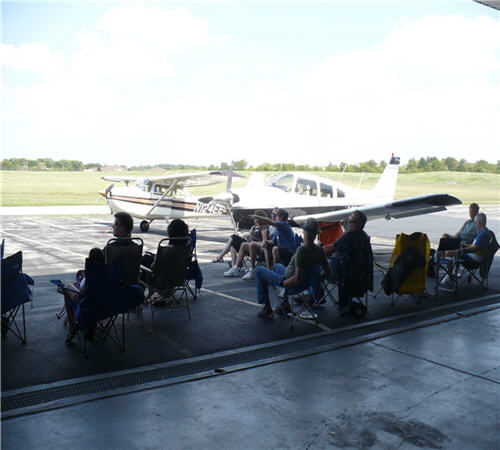 The cost of aircraft ownership is a hurdle that keeps many who long to explore the wild blue yonder on the ground, but aviation enthusiast groups often provide a welcome resource for people wanting to take to the skies. The Wisconsin Fox River Flyers (WFRF) is a non-profit/non-stock enthusiast group – based at the Waukesha County Airport – that provides its members with social and educational aspects for aircraft usage, along with the lowest cost of flight possible.

In November 1977, Carl Scheid, an engineer at GE Medical, formed the Wisconsin Fox River Flyers – with a group of fellow employees who shared a common interest of flying – to promote recreational flying, encourage flight instruction and make flying affordable. Scheid earned his private pilot rating in the U.S. Army and bought a J3 Cub, which he used to fly from Fort McCoy to Waukesha to visit family.

In its early days, the club was comprised of 8-12 members who paid monthly dues and hourly charges to share the costs of flying a Grumman A1B, which included insurance, fees and equipment. The club aircraft was kept on a concrete pad on the north side of Runway 10-28. The Grumman was lost in an accident in 1978 and replaced by a Cessna 150L, an excellent and capable training aircraft that was utilized by the club for many years. As the Wisconsin Fox River Flyers became more widely known, its membership grew beyond the original GE Medical employees.

In 1979, the club’s growth coupled with increasing interest in cross-country flight spurred the purchase of a PA-151 Piper Cherokee, providing the organization with both high wing and low wing flying options. In 1993, the Piper Cherokee was replaced with a PA-180 Piper Archer, a fully instrument capable 4 place aircraft. In June 2002, the Cessna 150L was sold and replaced win an instrument capable C-172.

Today, the club’s mission remains the same, but the organization has expanded to 45 members who are from Waukesha, East Troy, Hartland, Wauwatosa, Pewaukee, Delafield and other surrounding communities. All members enjoy an equity stake in the group, share the pride of aircraft ownership and have access to all club-owned aircraft, provided they meet club operating regulations.

In addition to allowing members to share the cost of air travel, the Wisconsin Fox River Flyers have taken cross-country trips together, help each other grow as pilots and foster friendships that last a lifetime. In the first quarter of every year, the entire group meets to discuss the direction of the club. Additionally, the club board meets each quarter, and club members are encouraged to attend. In the summer months, the group hosts a picnic, often in conjunction with other events taking place at the Waukesha County Airport. And, since flying is the focus of the organization, members regularly fly club aircraft within a 30- to 40-mile radius from the airfield.

If you’re interested in learning more about one of the many aviation enthusiast groups affiliated with the Waukesha County Airport, contact us. For more information on the Wisconsin Fox River Flyers, contact Membership Director, John Stangel.