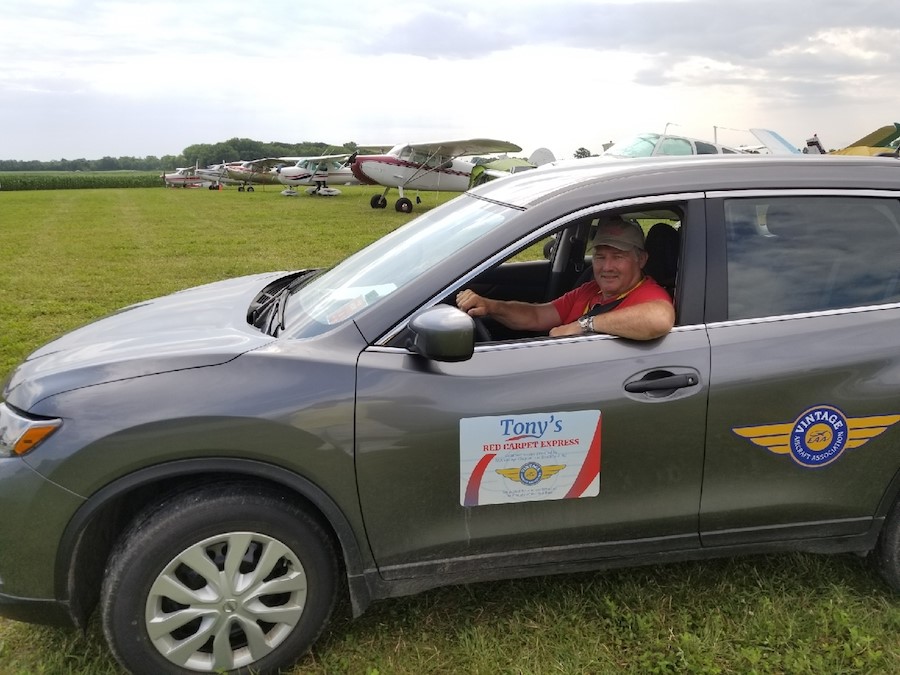 Aviation events like EAA’s annual AirVenture and other airshows and fly-ins offer a great way for aviators and enthusiasts to share their love of flight, but these events are often powered by volunteers who get involved for a variety of reasons. We recently sat down with Waukesha-area native, Jim Brown, a long-time volunteer with EAA, to find out what inspired him to become a volunteer, what concerns and excites him about the future of aviation and his words of wisdom to anyone looking at volunteering or pursuing a career in aviation.

We know that you are an avid aviation volunteer, Jim, but could you tell us about your background in aviation?

Actually, I am a private pilot and I fly General Aviation aircraft. I am based out of the Waukesha County Airport and I’ve had a hangar on the airfield for 17 years. I fly primarily for self-enjoyment and to share my love of aviation with family and friends.

It all began when I went to Oshkosh for EAA AirVenture with a couple of friends. We were intrigued with the ultralight planes, particularly because you don’t need a license to fly one. In fact, we talked about going in together and purchasing an ultralight, but decided that we had better complete ground school before that so we knew the rules and wouldn’t make a mistake. I could tell half way through ground school – which I completed at MATC – that an ultralight wasn’t going to do it for me, so I began taking flight lessons at Burlington and earned my private pilot’s license over a period of about six months.

What’s your favorite thing about being a pilot?

I love the view of everything! It’s such a different view. It’s great to be able to share the thrill of flying and the view with people. I also enjoy travel different places and visit friends in other states via a rather short and enjoyable flight versus spending hours in a car. I also think it’s neat to see how much technology has evolved since I began flying.

We understand that you volunteer with the EAA and have done so for about 20 years. How did you begin volunteering with the EAA?

I volunteer with the EAA Vintage Chapter 11, based out of the Capitol Drive Airport in Brookfield. One of my first projects with this group involved starting a handicap tram for EAA AirVenture. A friend of ours from the Capitol Drive Airport loved coming to Oshkosh, but she was wheelchair-bound and simply couldn’t get out of her wheelchair to get into a seat on a tram to travel the expansive grounds of the event. So, we built a tram in her honor – called Tony’s Trolley – that could accommodate wheelchairs. I became the Chair of the Transportation Service, and of course, EAA added more handicap accessible trams and other modes of transportation, over time. Then, the EAA approached us with a need to help move people and gear around in the vintage aircraft area. Since many people fly in to AirVenture, they don’t have a way to easily transport their luggage and camping gear when they arrive. So, we created a custom vehicle – Tony’s Red Carpet Express – that we use to shuttle people and their gear around all throughout the annual convention. There are about three to four guys from our EAA Chapter that volunteer to facilitate this service.

Do you have any interesting stories to share from your volunteer experience?

I’ve had the pleasure of driving many, many people around the grounds at EAA AirVenture, including many leaders in aviation. Everyone from airshow performers, restoration experts, industry pioneers, you name it – and the one thing they have in common is that they are all wonderful people.

One time, I transported a doctor from South Africa whose son lives in Texas. He stopped to visit his son in Texas on his way to the convention that year, and realized that he forgot his prescription medication not long after he landed in Oshkosh. He asked if I could take him to a pharmacy, and I took him to a nearby retail store with a pharmacy to see if they could help. Since he didn’t practice medicine in the United States, they wouldn’t recognize his credentials. He then called a stateside colleague, and unfortunately, they couldn’t help him either. After that, I took him over to the emergency/first aid station on the AirVenture grounds, and within five minutes he was all set up with the medication he needed.

What is it about vintage aircraft that interests you so much?

To be perfectly honest, vintage aircraft wasn’t a primary interest for me, but a friend of mine recommended that I join this chapter because the people were great. Sure, I love older aircraft, especially warbirds, but this division is made up of just a fantastic group of down-to-earth people. A wonderful bunch of guys from all walks of life, including people who are company executives, tradespeople and more. Because of that, we had all of our bases covered. No matter what challenge or problem you had, someone could help you out.

Again, I like vintage aircraft, but I didn’t have an initial affinity for it. For me, it’s all about the people. You see the same people year after year volunteering in preparation for and during the convention, and they become like family. We take good care of the people that come here and that means a lot to all of us.

This year is the first year that I’ve volunteered to do some advance weekend work before the convention, and we built a replacement building that houses a recharging station for electronics for the flight line. It was a neat project to be involved with.

Why is volunteering in aviation so important to you?

I think it’s important for a couple of reasons. 1) I love taking anyone for an airplane ride that wants to go because I love it and I want to share that with others. I frequently take people for rides on weekends and summer holidays because it’s special to me. Because not everyone can afford to fly in a private aircraft, sharing that experience with others helps to get them involved. 2) It’s all about the people. The entire EAA organization is powered by people. Volunteers are what makes a mammoth event like AirVenture work. One thing that always amazes me is how special the convention is. For the number of people here, it’s spotless, the grounds are beautiful and the people are respectful. It’s fascinating.

What do you feel that you get by volunteering in aviation?

When you look at the aviation industry overall, what concerns you most?

It may not feel as accessible to people as it did previously, even a few years ago. But, even though it costs money, realizing the dream of flight is approachable and still something the average person can do.

One area that concerns me are new and possible future regulations. Mandates mean increasing costs for people to comply, which is expensive and sometimes can require a significant investment in your aircraft. I understand that safety is important, but it seems as though there is almost too much information out there and I wonder if it’s all necessary and worth it.

On the flip side, what excites you about the future of aviation?

For me, it’s organizations like EAA. I look forward to AirVenture the entire year because it’s such a wonderful event. It’s always interesting to talk to people who are working on and restoring airplanes, fixing something that is failing or in disrepair and getting it back to flying condition. It’s a lot of work. Most restoration projects could never be afforded if an individual or organization had to fund the entire project, but volunteers stepping in to put hours and years of work into an aircraft because they’re passionate about it is truly fantastic.

What advice would you offer those interested in volunteering in aviation or pursuing aviation-related careers?

The demand for these fields changes all the time and opportunity is high. To anyone that is thinking about pursuing a career in aviation, you can, and if you work hard, you’ll get exactly where you want to be.